After her husband abruptly asks for a divorce, a middle-aged mother returns to college in order to complete her degree.

Where: Odeon, Brighton
When: Friday 11th May
Who with: Alone
Snacks: I can’t remember

Melissa McCarthy is the best human on the planet, isn’t she? I’m quite sure I’m right about that. Even when she stars in films that aren’t the best films, she is always the best thing in those films – and as for the things she has coming up later this year, colour me freakin’ excited.

LotP is really fun and exactly what you’d expect. When Deanna (McCarthy) is unceremoniously dumped by her fuckhead husband for another woman, she is initially devastated. Having given up her dream of college to start a family, it’s no wonder her thoughts eventually turn to what she still needs to do in her life.

It soon becomes clear to Deanna that she’s destined to return to university to complete the archaeology course she set aside when she got pregnant with Maddy (Molly Gordon). Maddy now attends the same college and is half-thrilled/half-freaked out by the arrival of her mum on campus but once she’s calmed down, it becomes a really great thing. Especially after a small make-over.

Deanna’s belated rite of passage leads her through a series of adventures, including sex in the library with a hottie, taking on the campus Mean Girls in a dance off, making friends with her agoraphobic goth roommate and getting off her tits with her daughter’s friends – all of which are truly delightful to witness.

But as will all films of this nature, there has to be a lesson learnt here – and Deanna must remember what this is all for in the first place. Will she? Course she fucking will!

Obviously this has a dynamite cast, not only Queen McCarthy but also ace support from Modern Family’s Julie Bowen, the most gorgeous woman on the planet Gillian Jacobs, Maya Rudolph and Chris Parnell. Even Christina Aguilera makes an appearance and it’s epic. I would also say special shout-outs to super bitchy Jennifer (Debby Ryan) and Heidi Gardner as Deanna’s weird roommate – both bring their A-game to their small but memorable roles. 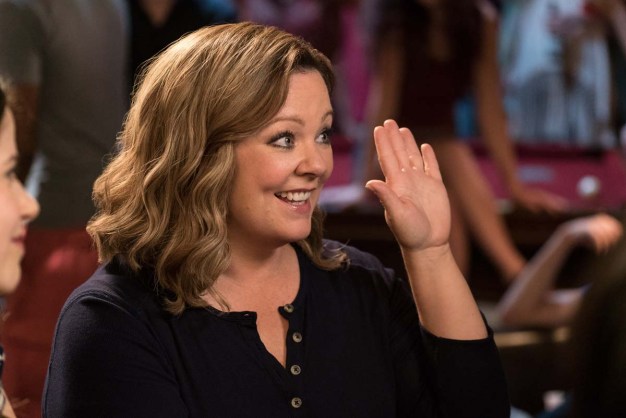 This is the ultimate Sunday afternoon feel-good movie – which doesn’t end the way you might think or want it to (Chris Parnell’s cute professor is surely destined to cop off with his favourite student) and that’s a good thing. This is about second chances and friendship and I’m very much here for all of it.

Melissa, I bloody love you!